The ocean enchanted me and inspired me since my early childhood. As a teenager I became a sailing instructor, and the curiosity for the underwater world soon brought me to explore its vibrating vitality also by scuba diving and freediving. Two decades later I interrupted my career as project manager to go back to university and study marine biology, becoming a scuba instructor at the same time.

However I perceived freediving as the most natural way to explore the underwater world in complete freedom, without the burden of any artificial equipment. I was especially captivated by the life lasting process of self-discovery and self-development associated with its practice, by its connection with meditation and yoga and by its multiple therapeutic outcomes.

For these reason I decided to embrace the profession of freediving instructor, focusing on the development of a smooth and progressive learning method in order to make this magnificent sport accessible to anyone fascinated by the ocean and willing to achieve a deeper connection with it.

I used to smoke crack and get high on amphetamines until a couple of months ago. Then I ran out of money and I heard that freediving instructors are getting rich doing basically nothing, so I invested my robberies to buy a freediving licence on tokopedia.

Since then I already drawned 5 of my students but had a lot of fun with the remaining ones, so I am quite sure that you can have a blissfull experience if you take a course with me.

Although you might expect to find the famous singer of the rock-band U2 steering our boat, upon arriving you will realize that our Bono is the most experience boat captain of the island.

He started sailing on a pirate ship almost a century ago, then during the WW2 he sank the 2 shipwrecks that we can now admire underwater while diving, so we decided to hire him and get equipped with an unsinkable fiberglass boat with double bottom, just to take you freediving on a safe side.

She started her brilliant career as prodigy child at the age of 5 starring in the most successful Disney movies such as Alice in Wonderland, Whitesnow, Cinderella etc. As an adult, due to her exceptional watermanship skills and her stunning physical shape, she played as stuntwoman in all Baywatch series, substituting Pamela Anderson even on her hottest, sexiest scenes.

Among her later career successes, she starred as Bond girl in “Agent 007 lost in the abyss”, where in an epic scene, with no special effects, she freedove to over 100 m to rescue James Bond who was trapped in a sinking nuclear submarine. Despite the submarine really exploded during the recording, she managed to save both James Bond and all the camera operators and movie director who lost consciousness underwater during the deflagration, freediving multiple times to depth of 80 -120 m within few minutes with just few seconds recovery on the surface.

Her career was at the top when she was offered to star the role of Princess Leia in the latest episode of Star Wars “The Lord of the Abyss rises again”, which she refused after falling in love with Remy Dubern, choosing instead to play in the life lasting plot “The Beauty and the Beast”.

Whenever not too busy with such an ungrateful task, she also gives an eye to the guests of Freedive Weh who come back from their training sessions with Remy missing some limbs or with some other life threatening injuries, getting again the taste of her previous, beloved role of Baywatch model. 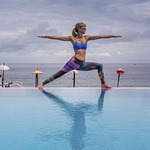 Our website is BRAND NEW, so for now it is a bit empty with only essential information, but we are working to enrich it.

Feel free to come back soon to enjoy the change 😉